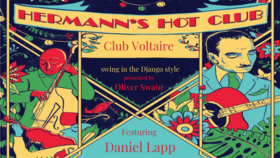 Thu. May 26th 7:00 - 9:00 doors at 5:30 (All Ages)
Livestream + In Person $25  Buy Tickets Online
>> Purchase In-Person Tickets
>> Donate to Support the livestream
Club Voltaire will be away this month in their place will be Daniel Lapp with an all star band backing him up!
Daniel Lapp is a world-renowned singer, multi-instrumentalist, composer, teacher, archivist, band leader, sideman, producer, promoter and – no kidding – the list goes on. And like the true-blue Canadian he is, Daniel does it all with trademark energy and warmth. As a fiddler, jazz trumpeter and singer/songwriter, Daniel Lapp has played on over 100 albums and performed across Canada, United States, Ireland, England, Scotland, Wales, Finland and Germany with some of the world’s most renowned Folk and Jazz musicians. Daniel is the winner of the B.C. Fiddle Championship and has appeared as a soloist with the CBC Chamber Orchestra as well as the Prince George, Victoria, and Vancouver Symphonies. A legendary force in Canada’s fiddle scene, in addition to his outstanding performing, Daniel has been musical mentor to hundreds of students—many of whom have gone on to successful careers in the music industry.

You can donate directly to the musicians and this venue at ArtsOnView.ca/Donate
© 2022 Arts On View Society