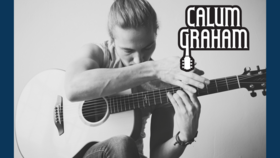 Calum plays the Acoustic, Baritone, and Harp Guitar in his live set and his original melodies embrace elements of folk, world, soul, blues and jazz – all built upon the foundation of the fingerstyle technique.

Prepare to be swept up in the fantastical soundscapes of Graham's fingerpicking, a versatile musician who has been named one of the top 30 under 30 guitarist by acoustic guitar magazine.

“The most promising young guitarist I’ve seen. His command of the guitar is already really impressive!”

Follow the link to watch a mesmerizing cover of Coldplay's "the Scientist" performed on the harp guitar.