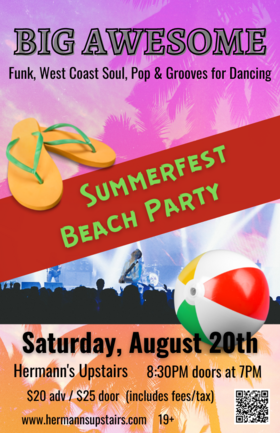 Sat. August 20th 8:30 - 11:30 doors at 7:00 (No Minors)
$20 advance including fees/tax / $25 at the door including fees/tax  Buy Tickets Online
>> Purchase In-Person Tickets
Fronted by husband and wife team Doug Towle and Andrea Shannon, Big Awesome will be performing with a full band for this great show.

Doug is one of Canada's premier guitarists having been recognized by Guitar Player Magazine as a top ten North American finalist in the 2009 Guitar Superstar competition. Steve Lukather (Toto) calls him a “beautiful player”. Jennifer Batton (Michael Jackson) says “sweet shredding”. Elliot Easton (The Cars) called him “the Four Seasons” of guitar.

Andreas sweet, soulful voice soars over Dougs husky baritone. After 17 years working behind the scenes, one fateful night threw an unsuspecting Andrea on stage and into the spotlight, that’s when everyone discovered her incredible voice. An accidental rock star, she has now become an indispensable part of the band.

Joining Doug and Andrea will be couple of local stalwarts of the local scene. Sheldon Bordel on bass and Nick Stecz on drums.

Get ready for a night of guitar heavy Funk Soul and Pop.
© 2022 Arts On View Society