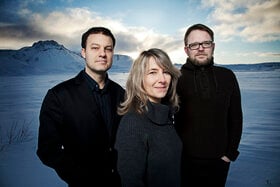 Tue. June 28th 7:00 - 9:00 doors at 5:30 (All Ages)
$33.25  Buy Tickets Online
>> Purchase In-Person Tickets
Sunna Gunnlaugs’ work has received significant critical acclaim since her 2000 release, Mindful, was selected among the top 10 albums of the year by the Washington Post. Her 2010 release The Dream, jumped to number 2 on the Canadian radio charts. Her albums have received extremely positive reviews in leading jazz magazines across the world, and all her albums have been nominated for the Icelandic Music Awards, winning “Performer of the Year” in 2013. Not only is Sunna Gunnlaugs Iceland’s premier jazz pianist, but she’s an internationalist who has spent a lot of time in NYC polishing her craft and deepening her compositional skills. Her latest album, Ancestry, was released in 2018. Gunnlaugs returns to TD JazzFest with her working trio, bassist Thorgrimur Jonsson and drummer Scott McLemore.